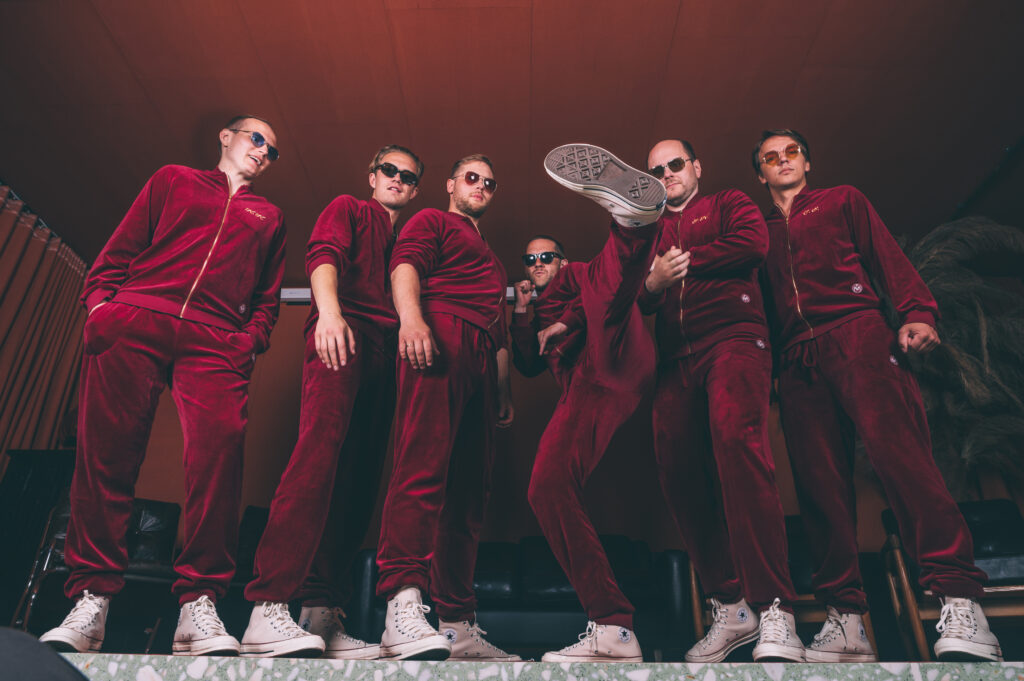 Raw street funk on one side, with sweet soul on the other—Lexsoul Dancemachine is a 6-man groove band known for tearing venues apart with their stage presence. Active since 2013, the aim of the machine is to hypnotize feel-good music lovers with thumping bass lines, syncopated rhythms, repetitive grooves and soulful vocals. It’s the kind of music you can break dance to, although in between those hard-hitting sounds you’ll find some more tender grooves.

December 2015 saw Lexsoul Dancemachine self-release their debut album after a successful kick-starter campaign. Deus Lex Machina was put out on vinyl, CD and digitally. 2016 was filled with live gigs in the Baltic-Nordic region, including Tallinn Music Week, Positivus, Funky Elephant and Pori Jazz Festival in Finland.

After making a big local splash with the record, the band broke the international level courtesy of a 5-star review from monkeyboxing.com, an UK blog with an appetite for the Funk. From there on, it was picked up by Craig Charles Funk and Soul Show on BBC 6 and BBC 2 with singles “Beef Grinder” and “Coconuts” on the rotation ever since.

“It’s like the Electric Six and Bohannon had a child and it grew up to be Lexsoul Dancemachine.” – Flea Market Funk

“In short there’s no posturing here, they wanna get into it man, you know – like a…well…like a sex machine. JB would be proud.”- monkeyboxing.com

“Hot-blooded, full frontal funk assault not for those of a delicate disposition.” – Craig Charles

The raw funk beast shines first and foremost in a sweaty live setting. They’ve yet to leave a crowd unfazed as evident from the first UK tour in February 2017 when the Dancemachine made people stomp their feet in London, Bristol, Manchester and Leeds. Among the dates was a sold-out evening at the iconic Band on the Wall venue during the Craig Charles Funk and Soul Club evening.

2017 saw the local release of Sunny Holiday In Lexico, the second LP by Lexsoul Dancemachine. Exploring latin-funk and disco territories in addition to their funk-soul repertoire, the album was released internationally in March 2018 with an added bonus track in all formats.

In 2020 Lexplosion II blasted its way onto the dancefloors, car stereos and boomboxes. The 8-track LP provides fire power for the funk-soul-disco DJ, albeit remaining a pleasure treasure for the leisure listener. The album features collaborators such as the loose-wristed guitar funk icon Cory Wong from US; the Brazilian percussion maestro with gigs with James Brown on his résumé, Luiz Black; and a local dame with staggering licks on the violin, Liis Lutsoja. Per usual Lexsoul Dancemachine crosses genre borders with tunes in soul, disco, boogie and even house modes. Lexplosion II brought along a summer full of celebrations; from the album launch mini-festival in Põhjala Tehas to a 3.5 hours long concert on the roof of a driving bus.

“Always pleased to hear from Estonia’s finest funkers! They got a sound which is totally unique to them – bursts with energy.” – Craig Charles

“The heart of soul and funk lovers will be taken by storm as well as those in the jazz cosmos. LSDM is all about groove, groove, groove!” – Michael Arens, Soultrainonline.de